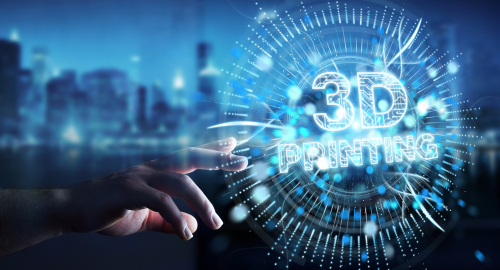 On June 12 2019, HP opened the doors to its cutting-edge 3D Printing and Digital Manufacturing Center of Excellence in Barcelona, Spain. As it made one of the boldest statements for R&D yet to be seen in the 3D printing industry, HP hosted a small contingent of industry analysts for a tour of the advanced research and development facilities. These are packed with next-generation technologies, experts and engineers, all of a piece to disrupt traditional manufacturing supply chains through 3D printing and digital manufacturing technology. 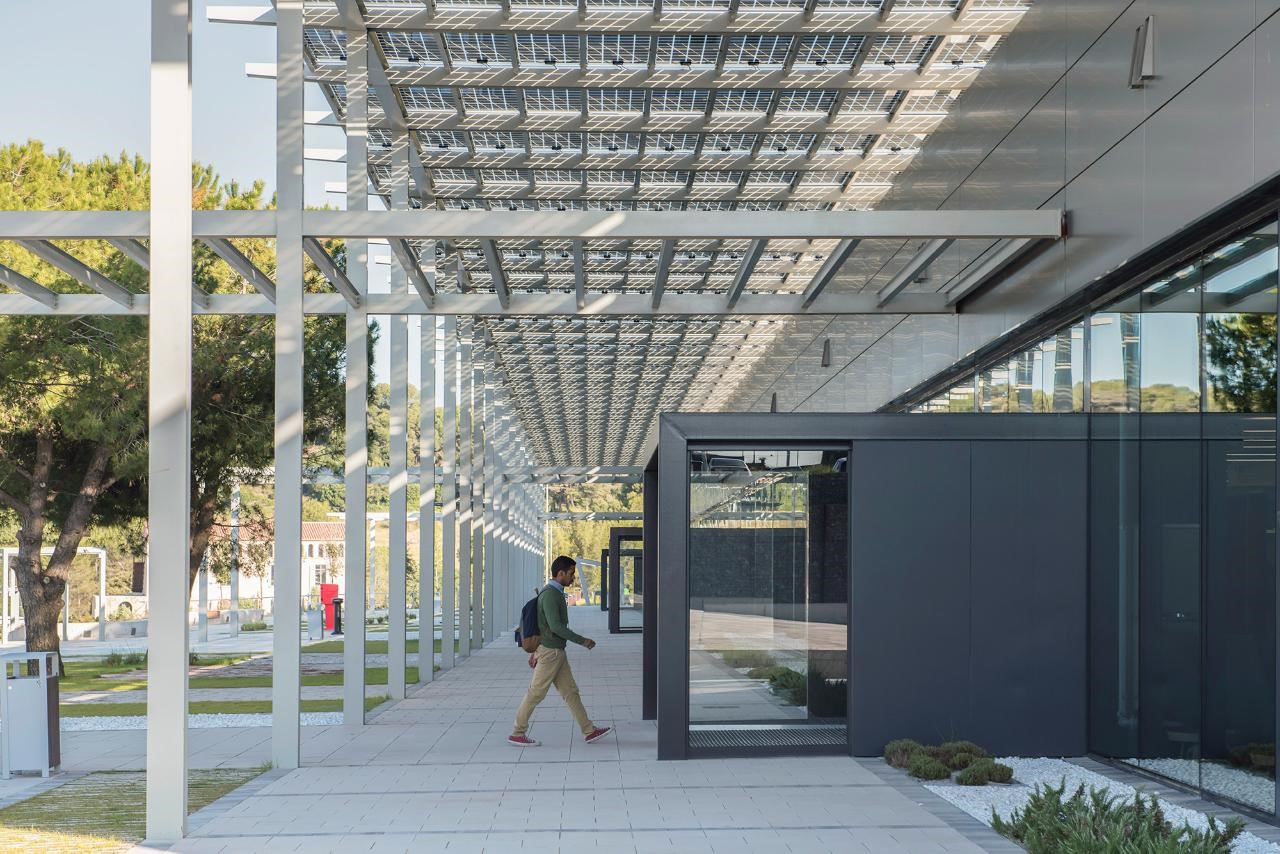 The 3D Printing and Digital Manufacturing Center of Excellence in Barcelona, Spain. Photo courtesy of HP

An industry in transition

As the 3D printing industry gears up for its next phase of maturity, it has found itself at a major inflection point. The hype of yesteryear, powered by the technologically-driven belief that the 3D printer would soon be a staple in every household, has proven incorrect. Instead, technological and material advances and deepening alliances between print manufacturers and major industry players, have shifted the emphasis from the actual printing of objects to the broader disruption of traditional supply chains through true digital manufacturing.

It is at this critical juncture in the industry that HP has opened the doors to its all new 3D Printing and Digital Manufacturing Center of Excellence in Barcelona, Spain. Quocirca was present at the facility’s unveiling on June 12th, which offered attendees the opportunity to explore the latest additively manufactured consumer products, industrial use cases for polymer and metal printing, and get a glimpse behind the scenes at the colossal printing laboratories.

The timing of the event was significant, coming only weeks after both the official launch of the HP Jet Fusion 5200 series – an evolution of the 4200 series and capable of printing polymers at substantially higher volumes than its predecessor – and the announcement of an expansion of the strategic alliance with Siemens to maximise operating efficiency through software solutions.

The new 150,000 square foot 3D printing facility, said to be the largest of its kind anywhere in the world, is purpose built to bring together leading experts in systems engineering, data intelligence, software, materials science, design, and digital manufacturing applications to drive HP’s stated goal of bringing about an additive revolution in manufacturing. HP’s new facility is over three acres in size and generates over 110kW of photovoltaic power.

As the centrepiece of the new R&D facility, dozens of Multi Jet Fusion units run around the clock, printing a multitude of different final products and prototypes for customers to test applications, and to arrive at new design iterations for a range of industry and consumer verticals. 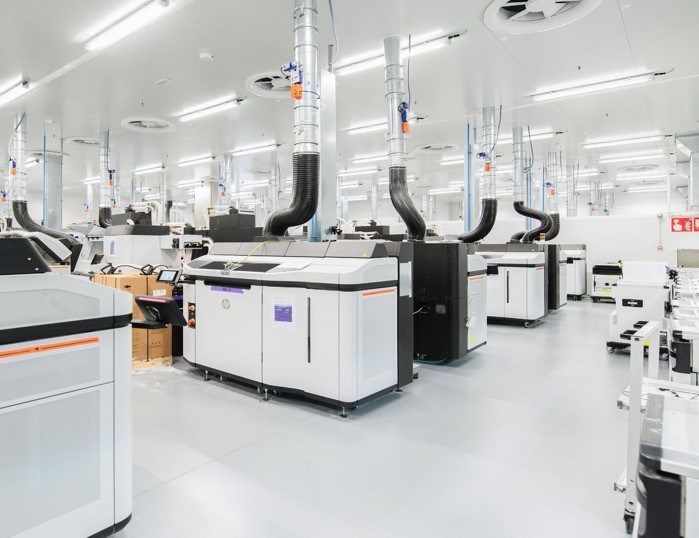 HP has leveraged an ecosystem of partners and extensive industry experience in 2D printing to make the Jet Fusion 5200 more than a linear evolution of its 4200 predecessor. The Jet Fusion is designed for high volume manufacturing while HP’s earlier Jet Fusion 4200 was designed for small-scale production.

Christoph Schell, President of 3D Printing & Digital Manufacturing, points out that “the 5200 is more than just an isolated software improvement, it has changed how data is managed, how software is managed, this is allowing the acceleration of the prototyping to production transformation.”

According to Schell, the 5200 also demonstrates that, actually, “HP is in the data business”, and he described how each print job produces a massive 4TB of data that is harvested and used to track every metric at every subsistence level. This paves the way for predictive maintenance as well as improving dimensional accuracy in conjunction with AI-powered, algorithmically-driven software platforms. This all helps to build statistical confidence that parts will be reproduced at 100% accuracy. At the same time, the 5200 Series is said to be up to 40% more productive than its predecessor with a 30% reduction in running costs. 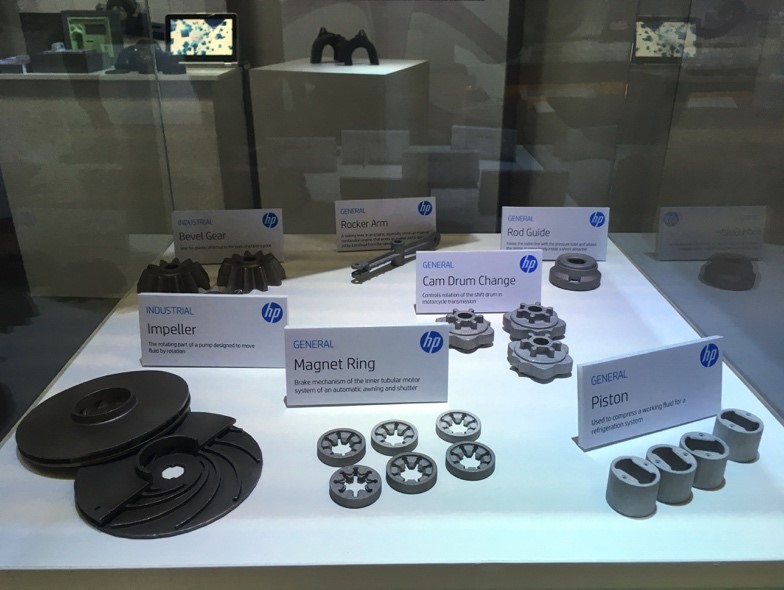 These systems will also be integrated into HP’s Metal Jet, which, according to HP’s Global Head of Metals, Tim Weber, will produce final steel parts to ASTM International standards at 50 times the productivity of conventional laser or electron beam powder bed fusion systems. The HP Metal Jet will be ready for shipping in 2020, and is understood to be on order with major industry partners Volkswagen and GKN. Quocirca will be keeping a close eye on the technology and how it compares with competitor metal printing technologies.

“We are surprised by the creativity and the number of new applications coming from our customers every week. From the boots of Lady Gaga to the helmet of the Swiss Guards, to new footwear technology, it is amazing to see the value that 3D printing is giving,” Pastor stated. 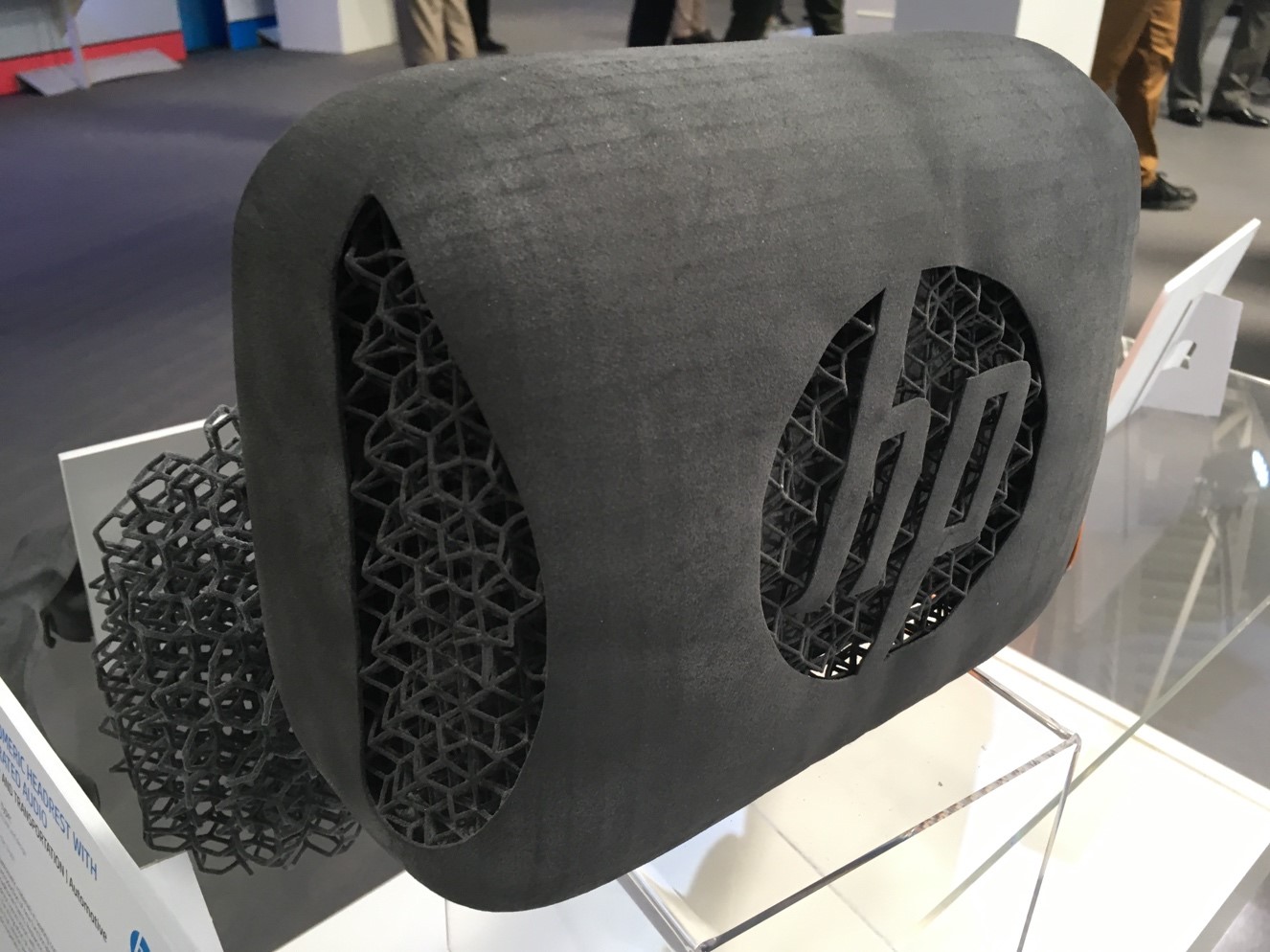 TPU material is being used to prototype innovative parts for automotive and other applications. – Photo by James McKay –

Much of this advancement has been made possible through the new TPU, ULTRASINT material developed by BASF that has elastomeric qualities, enabling the design of flexible, functional parts. Some of these were seen on display, with the sports helmets by Kupol and a car head rest with integrated loudspeaker both demonstrating the lattice structures facilitated by TPU. To take advantage of the durability and light weight it offers, large industry manufacturers are also using TPU for final mechanical parts, such as the windshield guide for the BMW i8 Roadster. 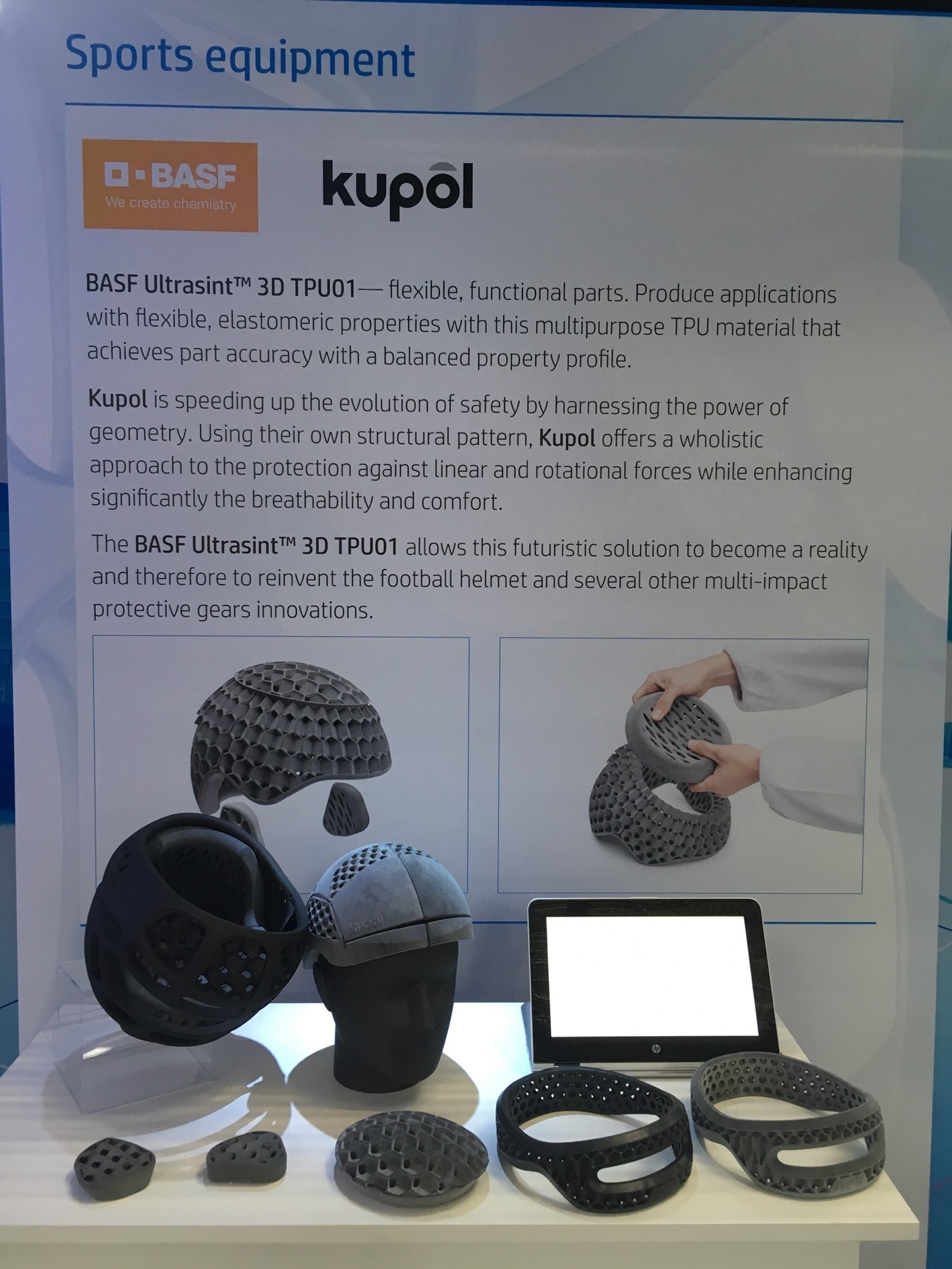 “We are not in the 3D printing business, we are interested in how introducing a fundamentally new way to create a product impacts the entire value chain” – Christoph Schell, President of 3D Printing & Digital Manufacturing, HP

In spite of the impressive product diversity on display, Mr. Schell was eager to impress upon attendees that the real interest for HP lies in production through digital manufacturing, and to illustrate his point, highlighted the non-linearity of HP’s growth in production parts. According to Schell, all of HP’s global customers combined used 10 million parts on their printers in 2018.

“For 2019”, Schell explained, “one customer alone – the Smile Direct Club – has a plan in place to produce 20 million parts, this is because the end-to-end business models and new print robustness we have enables them to print 24/7”.

Stronger together: alliances, networks and partnerships

Building bridges with key industry players in order to succeed in the emergent digital manufacturing paradigm was high up on the event agenda. The complexity and relative immaturity of the additive manufacturing workflow chain requires the fostering of partnerships (or the execution of acquisitions, as seen with Xerox’s recent acquisition of Vader systems) to drive technological progress through local expertise. Here, HP has created a coalition of strategic partners such as BASF for materials, SIEMENS for software solutions, GKN for metal binder jetting development, and others. 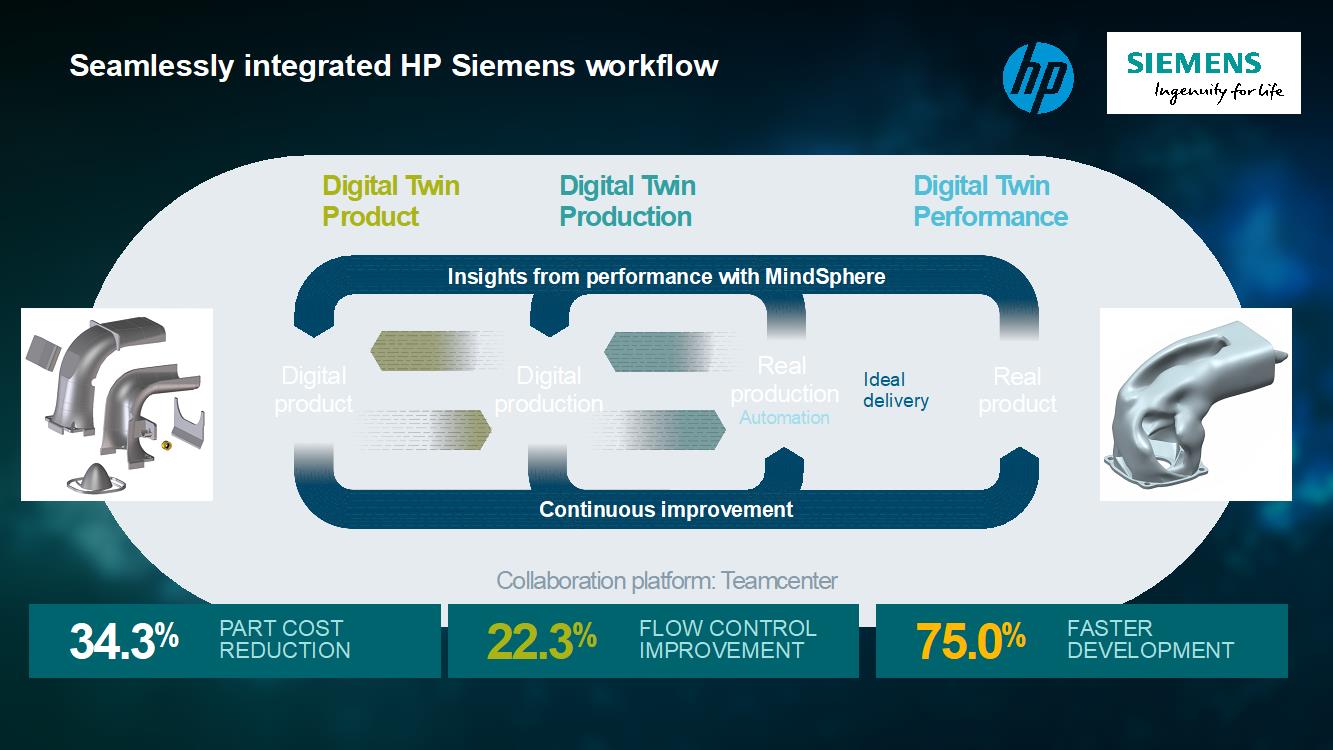 Siemens solutions can optimise part topology and streamline every phase of the production process. – Image courtesy of HP/Siemens –

According to Karsten Heuser, Vice President of Additive Manufacturing at Siemens, this customer-driven collaboration is part of the ‘value co-creation’ that is necessary for the 3D printing space to scale to serial production through incentivising innovation.

“As a team, in a very early phase we can generate a seamlessly integrated, first time right, workflow for 3D printing systems which has additional value for the user” – Karsten Heuser, Vice President of Additive Manufacturing, Siemens

HP’s Chief Strategy Officer, Phillip Jung, stated that the driving force behind this collaborative approach is the customer, and it is with this in mind that HP launched the Digital Manufacturing Network, a global platform to help customers lower their time to market by matching them with certified vendors. BASF, Siemens, GKN, and ZiggZagg, are but some of the partners included in the network who are sharing expertise in digitisation, materials, and software to drive the market for polymer and metal additive manufacturing processes.

HP’s event in Barcelona signified more than just the launch of a R&D center. The wealth of partners and breadth of consumer and industrial products on display all but confirmed the degree to which HP is doubling down to take up a leading position in the 3D print industry, as it transitions from rapid prototyping and low-volume production, to mid-volume production en route to serial manufacturing.

A critical, yet overlooked, aspect of HP’s favourable position in the 3D printing industry is its vast track record in label and other industrial printing solutions, where demand for customisation has presented similar challenges of short order print runs that must be addressed for the future viability of business models. The totality of this industrial systems experience means that HP can leverage its vast repositories of data and metrics spanning the entire print process on improving automation, integrating systems for smoother workflows, minimising downtime, and increasing productivity. Very few OEMs can match this. 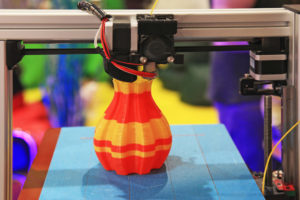 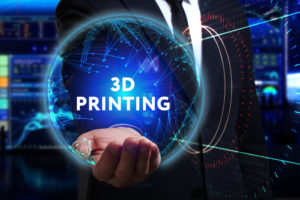 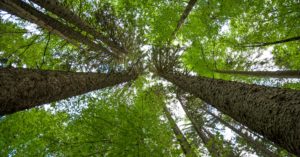 QUOCIRCA STATE OF THE CHANNEL 2020 STUDY

What will be the key trends for the office print channel in 2020 and beyond?